Don’t under estimate the power of words. No matter how base.

The internet adage Godwin’s Law states that the longer an online conversation continues, at some point, someone will be compared to Hitler or the Nazis. The idea is that internet debates get so out of hand and are so often filled with visceral emotion and venom, that sooner or later, an opposing party will compare their adversaries to the aforementioned genocidal despot.

The crux of the law is the it takes time for a heated conversation to build up to a boiling point where the comparison to Hitler is made. It’s implied that the comparison is intrinsically unsubstantiated because it’s borne out of a prolonged emotional discourse of competing factions.

But here’s the thing when it comes to our sexist, egotistical, lying, hypocritical bigot of a POTUS. You don’t need to wait that long for this pathetic excuse of a leader to be worthy of the Hitler comparison. I argue he “jumped the Godwin shark” as POTUS way back on January 20, 2017. (Forgive my conflation of pop culture television metaphor and internet vernacular).

I truly believe that the current president of the United States, Donald J. Trump, is sincerely trying to make every subsequent rally he has more debase, insulting, and caustic than the last. It’s like he lives for the ability to live up to his family name and “trump” every racist, misogynistic, and hateful speech with the next.

The one he gave in Minnesota this past week was in this humble author’s opinion, one of the most chilling and recognizable call-backs to a bygone era when one politician used hateful rhetoric to rile up a nation into a second world war.

Let’s not forget the fact that this president acts in a way that we used to discipline our children for acting. His utter lack of decorum and his use of profanity and school-yard shade is beyond the dignity of a respected world leader, let alone the president of the United States.

But I defy you to defend the way he spoke of Somali refugees and essentially equated American safety with denying aid to refugees and getting rid of sanctuary cities.

Trump’s supporters will say that he is talking about reasonable immigration reform. He is not outright denying refuge. To which I say, “Bless your heart.”

The real meaning of some words

I lived in the Atlanta metro area for nearly six years, and anyone from the south will tell you that “bless your heart” more often than not, is a way to throw shade. The words in and of themselves have a positive meaning. But the actual meaning is clear to anyone who knows “the code.”

There is no hiding what Trump is meaning in his rhetoric about Somali refugees. He knows he’s talking to a room full for racists who don’t want Somali’s in their community, so all his talk about making sure local communities can determine for themselves how many refugees they want is code for “Don’t worry, as president I’ll make sure YOU can keep out all those people from sh*t hole countries.”

He’s not giving the people at this rally a complete picture of the situation in Somalia that has resulted in the mass exodus of so many of its people. He is not trying to endear compassion for human beings who are suffering and looking for a better world. He is not appealing to those principles of this country that are inscribed at the base of the Statue of Liberty: inviting and welcoming those who are beaten and broken into a world where they can make a better life. 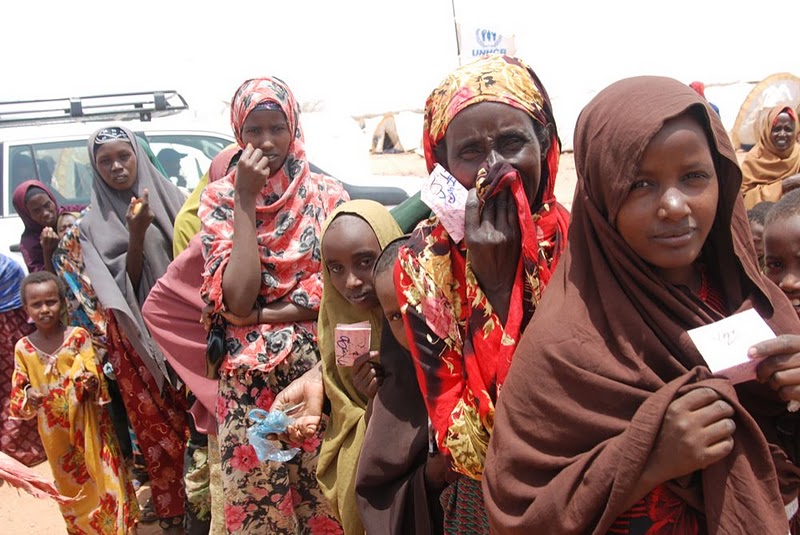 He’s not recounting the success stories of immigrants who have built some of America’s greatest companies; or the stories of refugees like Omar who, despite having a different set of political ethics, was able to come to this country as a refugee and rise to the seat of congress.

What Trump is doing is the same thing Hitler did nearly a hundred years ago—appealing to the fear, hatred, and racism towards people who are outsiders; people who are different; people who “don’t belong.” People who happen to be of African descent, pouring into a predominantly white culture and “diluting” it. Infecting it like a sickness. (He might as well be Agent Smith in The Matrix telling Morpheus how much he feels infected by humans.)

So why is all of this important? It’s just a rally, right? They’re just words. Right? Well, if that’s what you think, “Bless your heart.”

Hitler didn’t rise to power because he was some kind of war-mongering wunderkind on the battlefield. He was actually somewhat of a failed politician in the early 1920s and even arrested and jailed for high treason after a failed coup attempt.

But it was his rhetoric and words that raised him to fame and power.

No historian questions Hitler’s skill as an orator and the affect that skill had on those that followed him—followed him to commit the worst atrocities of the 20th century.

Trump supporters will often give Obama ONE piece of credit: they’ll acknowledge that he was a “good speaker.” They say it almost like it’s a negative quality. As if the ONLY thing he was good at was speaking.

But we all know the power his words had to inspire the BEST in the American people, not the worst. It was his words that led him to becoming this country’s first African American president.

Don’t let anyone dismiss the power of Obama’s positive words when he was leading this country, or the danger of Trump’s hateful rhetoric as the current POTUS. Trump’s words have already led to increases in hate crimes in the country and massive division not just in families and friendships, but even in the highest echelons of government.

Trump is NOT an eloquent man. With every speech he betrays his lack of education, knowledge, and command of the English language. But that’s what his followers love about him (perhaps because statistically speaking, the greatest percentage of his supporters are themselves non-college-educated. That is NOT a knock on them for lack of education. It’s a reflection and an attempt to understand how someone as ineloquent as Trump can rile up a crowd as powerfully as Hitler.)

A big part of it is because he says things they want to hear, and he says it in a way they like to hear it.—down and dirty, just like Zeke down at the city bar. (No offense if your name actually is Zeke.)

Words have power. DON’T EVER FORGET THAT.

Do you think they crucified Jesus because he healed some lepers? No. They killed him because of his words.

Shakespeare is remembered and revered 400 years later because of his words.

Words and rhetoric are so important, that when the King George VI of England wasn’t able to express them well, the whole country was concerned about it, and he hired a coach to help him. We made a movie about it and it won BEST PICTURE.

Power to heal or to hurt.

Power to divide people, or bring them together.

Power to inspire an entire nation of different races, religions, and political views to be the best versions of themselves and earn the respect of the world.

…or they have the power to elicit the absolute worst in everyone in this country and continue to make us the laughing stock of the world.

In 2020, you’ll have the chance to help decide what kind of words will continue to be spoken from the pulpit of the POTUS.

Words that still have power

Not like the brazen giant of Greek fame,
With conquering limbs astride from land to land;
Here at our sea-washed, sunset gates shall stand
A mighty woman with a torch, whose flame
Is the imprisoned lightning, and her name
Mother of Exiles. From her beacon-hand
Glows world-wide welcome; her mild eyes command
The air-bridged harbor that twin cities frame.

“Keep, ancient lands, your storied pomp!” cries she
With silent lips. “Give me your tired, your poor,
Your huddled masses yearning to breathe free,
The wretched refuse of your teeming shore.
Send these, the homeless, tempest-tost to me,
I lift my lamp beside the golden door!

The New Colossus, by Emma Lazarus

This site uses Akismet to reduce spam. Learn how your comment data is processed.

The official site for the satirical memoir that will either crack you up, piss you off, or both. An emotionally moving, frequently funny, and often politically poignant coming of age story. Except the age is 50.

Sign up for the email list to buy the ebook at a discount, as well as get updates on the making of the animated series.